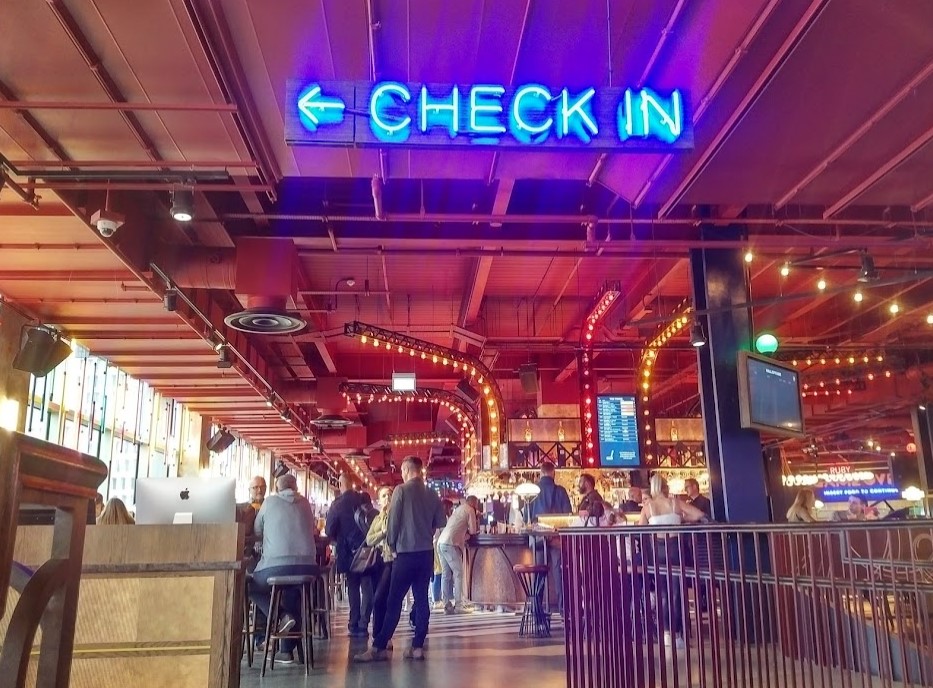 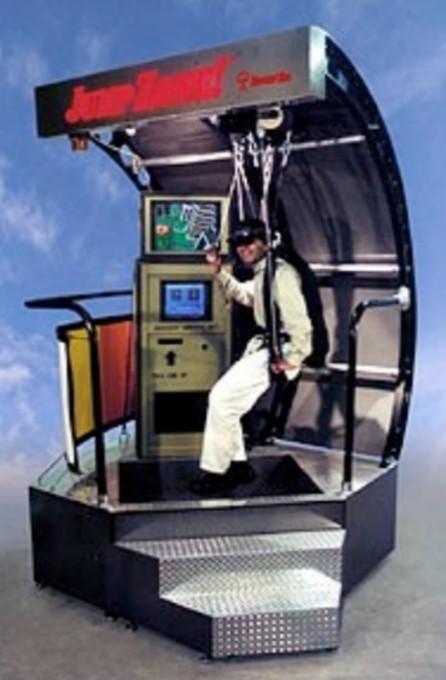 Jump forward into the latest phase of VR adoption and, since 2016, we have seen a number of design concepts which dropped the player into the role of parachuting, such as with the Codemodeon ‘Action Star: Parachute’ VR simulator, the ‘ParaParachute’ or Mindride ‘Airflow’ concepts, as well as many other rudimentary projects. Plummet some twenty-one years on from ‘JumpZone!’, and a new developer hoping to incorporate its unique parachuting simulator into the operators mix is InnoTech with the ‘VR ICARUS’ system. This is one of several modern interpretations of the latest phase of VR technology, married to a suspended seated position and mechanical lift system, to simulate the suspension of the player from a virtual parachute. Again, we see an example of the pull of the “Active Immersive” experience, offering something that a large percentage of the audience will never experience. 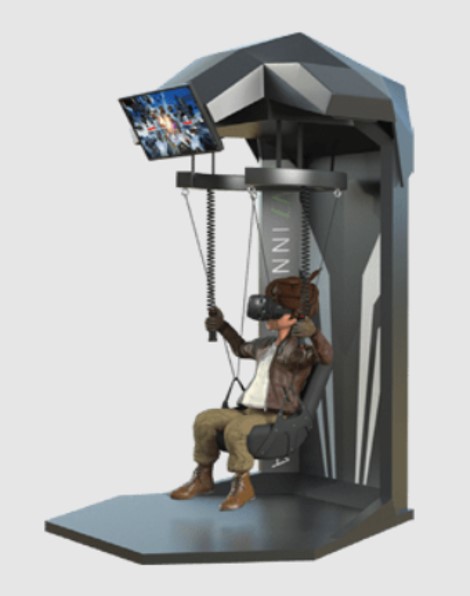 The creation of a compelling and exciting experience defines the “Active Immersion” revolution in the sector. One of the first providers of an immersive, flying VR experience was Frontgrid, with their 2017, under-canopy, virtual reality flying experience, named ‘ParadropVR – Rize’. Following the initial launch and with some ten installations worldwide, the company has been actively working on a successor. To be launched this year, the new system, called ‘ParadropVR – Pod’, offers a more compact construction, able to accommodate a wider plethora of venues. This is a system that will no longer require an operator, accessible by the player via a touchscreen kiosk. At the same time, the new game experience called ‘Discover’ has been enhanced. The game has players flying through hoops, soaring over mountain ranges, and able to play and converse simultaneously. They participate in a multi-player competition, supporting shared online leagues, via league rankings accessible at the venue, via smartphone and online. 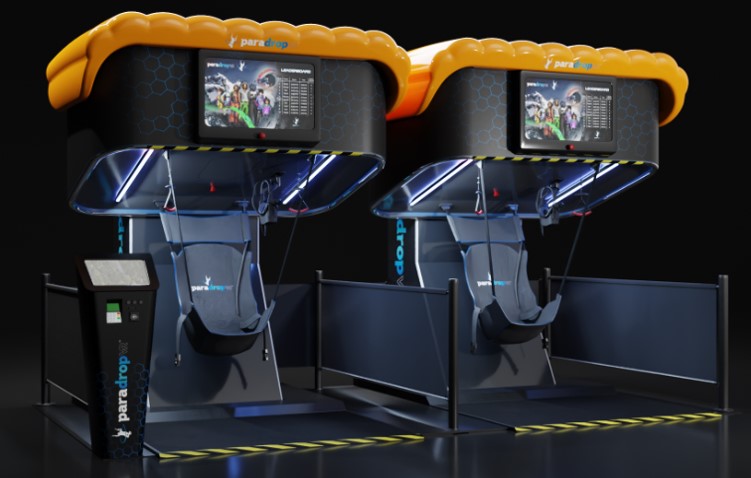 VR platform developer Somniacs has achieved a pedigree in creating an award-winning full-body immersive experience, as the developer of the legendary ‘Birdly’ platform. The system acts as a human-powered flying interface, but also includes motion effects, along with wind, to achieve the compelling experience which re-creates soaring the skies, as well as diving the depths of the ocean. The system was one of the first to offer a VR experience for the commercial entertainment landscape, launched back in 2014. The system has found a home in entertainment, leisure, and educational spaces, partnering with D3D Cinema to represent the system in the museum and gallery sector – one of the latest experiences being ‘Jurassic Flight’. Somniacs has launched the ‘Birdly V2 Serial Edition’, which offers a low-maintenance version of the popular platform, supporting Swiss precision design. With over 50 units sold since launch, one of the latest high-profile installations for the unique system was seen at ‘AREA15’ in Las Vegas, with the operators of the platform so impressed with the interest from their audience that they propose to construct a special enclosure to accommodate the growing crowds. 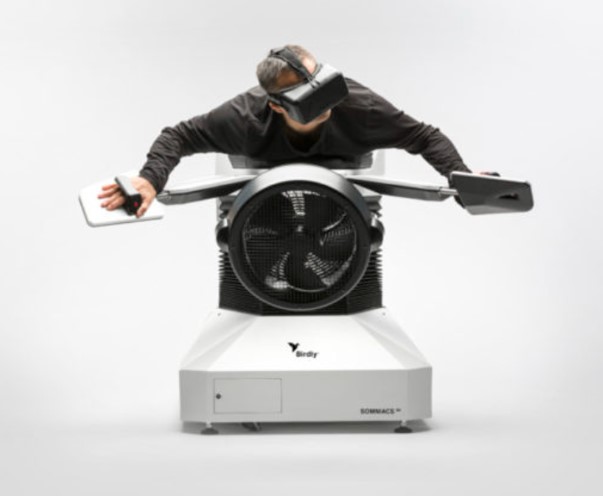 We continue with this trend, as we move on to larger dedicated VR attraction releases which we have previously covered in The Stinger Report. Comprising the creative team instrumental in The VOID, a free-roam VR experience, the previous creator and co-founder of the operation has introduced his new endeavour called ‘JUMP’, supported by the team of the new operation Limitless Flight, and proposing to create a dedicated experience. By putting on VR helmets (using elements from a Valve Index headset), and specially developed wingsuit attire, guests can jump alone, or with their friends. Using a unique wind and suspension system, the players experience both the virtual representation and physical effects in this realistic flight simulator. The company has incorporated practical effects, alongside the VR helmet, such as olfactory and wind, so the strapped-in flyer is fully immersed in the experience as they “jump” off a virtual cliff. It is important to understand that ‘JUMP’ offers a new type of active experience, with the development team capturing real-world locations including popular base-jumping and wingsuit locations that are then turned into 3D models and rendered as virtual environments that the players can navigate in real-time (not passive 360° virtual viewing experiences). During a stage presentation at the AEI’21 VR summit (ShowUp), the team revealed their vision, which includes key investors and plans for the first location at ‘American Dream’ in New Jersey, near the end of the year. Additional retail locations and dedicated entertainment venues are also being discussed. This new company hopes to drive a repeat audience to their facilities, offering group packages, and building a loyal audience to their interpretation of “Hyper Reality”. 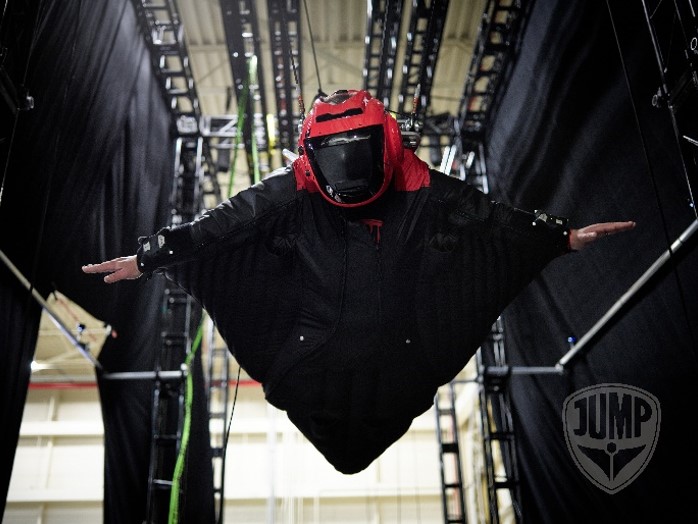 However, other developers have gone for a more brute force approach to achieving a freefall experience. The leading indoor skydiving operation is iFly, with 80-wind tunnels internationally, owned by ProParks Attractions Group. And, in 2018 and at selected venues, the operation installed their own VR experience (‘VR Skydiving’). The system saw the adaption of a modified flight helmet, incorporating a Samsung GearVR headset and offered “flying above Hawaii, Dubai and California in VR” – passive 360° VR experiences. The system was specially created to be mirrored to the movement of the users, as they float within the iFly skydiving system. The operation has updated the experience, including adding ‘Ultimate VR’ to their package of experiences. 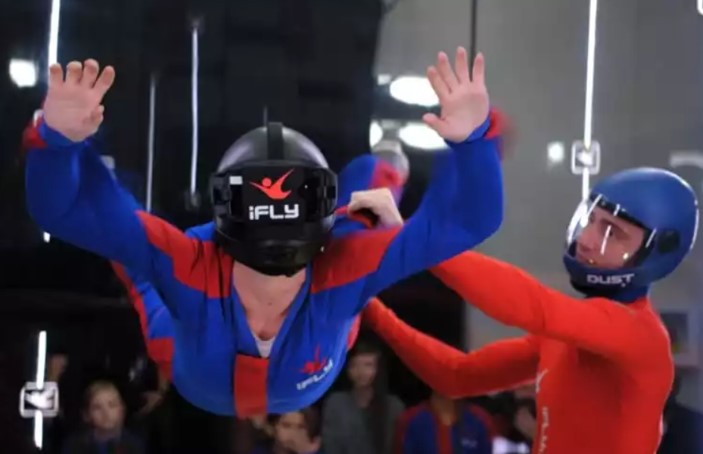 The interest in extreme VR experiences has fuelled a spate of other skydiving operations looking to include a VR element to the packages on offer. One of the latest is the new ‘VR-Bodyflying Xperience’, at the Munich-based jochen-schweizer-arena. The venue uses specially created content which includes skydiving and base-jumping – all running on the Oculus Quest2 headset mounted into the flight helmet. The VR element is used as addition to the two-minute body-flying experience. The product and the procedure are designed to be integrated into the usual organization of body-flying sessions offered in indoor skydiving wind tunnels worldwide. The unique tunnel system which is employed at the Munich sites is represented by Jochen Schweizer Projects Holding, who retained local developer Aesir Interactive to create the VR experience. 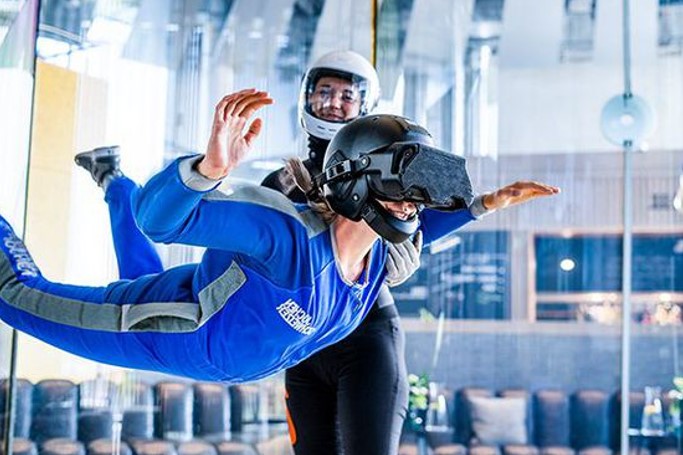 Not to be left behind, even India’s largest indoor center, Wefly Indoor Skydiving, has added a VR experience to their indoor skydiving system. This system employs Oculus VR headsets to offer a rudimentary experience, developed by local creators. 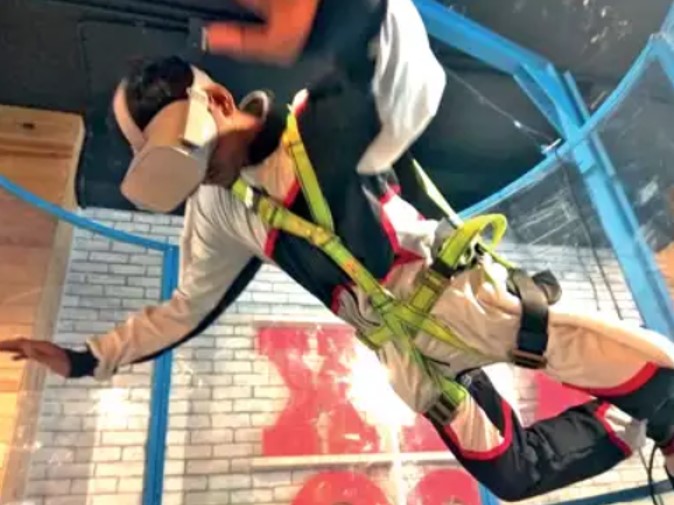 One unusual application of an extreme VR experience was created as the latest VR exhibition for the Swiss Transport Museum in Lucerne. Named ‘Red Bull The Edge’, the VR backpack PC, free-roaming experience is a virtual recreation of a climb to an altitude of 4,478 meters, to the top of the Matterhorn. The VR experience uses an actual climbing ball to represent the physical exertion of the final push to the top of the mountain, developed by Red Bull Switzerland in collaboration with the Musée des Transports, and in partnership with the X Studios agency. The backpack PC, HP Reverb G3 headset, and hand-tracked experience, is a sophisticated recreation of the excitement of mountain climbing, including physical effects along with the virtual experience – with the user able to capture their exhilaration on reaching the (virtual) summit in a personalized selfie at the end of the experience. 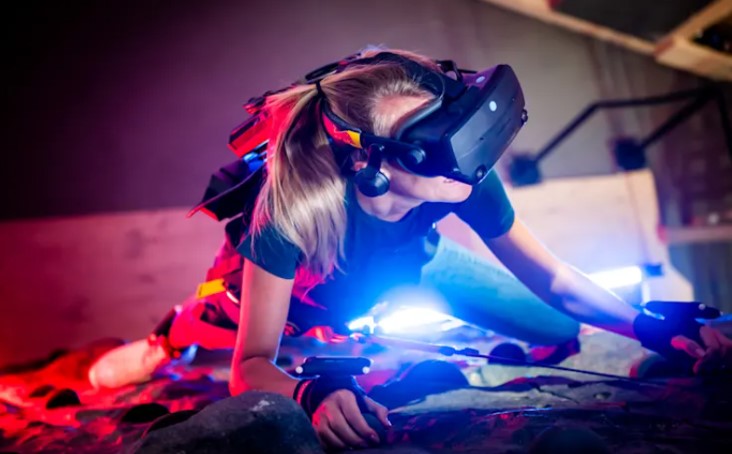 This is the latest VR experience from Red Bull promoting their support of extreme activities, including VR experiences based on their Red Bull Air Race, or the ‘Wingsuit VR’ installation by Red Bull and HP Omen. Or again in partnership with Museum of Transport at Lucerne, with the 2019 “Experience the Edge” exhibit, installed the ‘Red Bull Stratos’, and based on the ‘Felix Baumgartner’, 39km high in the stratosphere freefall sponsored by the energy drinks corporation. The capsule and space jump recreated uses the captured footage and is presented in a heart-pumping VR experience for guests. The system uses Oculus CV1 headsets with mounted Ultraleap units for tracking hand movements, as the guests take the big step into space. 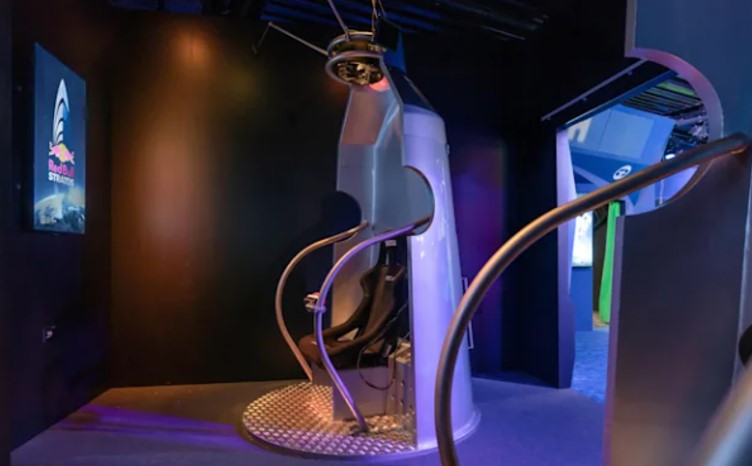 Although most of this coverage is focused on virtual reality, there are other active entertainment systems which are highly immersive but also avoid the need of using a head-mounted display. For example, the activate nature of ValoMotion’s range of products cannot be denied, with the projection mapped climbing wall experience (‘ValoClimb’) and the trampoline game experience ‘ValoJump’ – supported by the new competitive eSports element recently launched. As stated earlier, the highly physical nature of the platform brings an active-sports vibe to the platform, with the addition of the consideration of sports-fitness. Companies such as BlackBoxVR are adding active VR fitness training to their mix. The establishment of the highly active VR experience has also lent itself to application as a VR fitness experience. Offering a highly physical VR experience platform, ICAROS first launched their highly active exercise experience in 2016 – a system that could be operated with or without VR but was able to offer consumer and commercial gaming experiences which exercised muscle groups like no other system. However, not all LBE guests expect a workout from their entertainment and new applications were designed. In 2019, the company launched their ‘ICAROS R’ platform, which took the prone player position of the original, and re-imaged the system as VR motorcycle-style simulator. Later in this report we will look at other developers who have gone for a motor-sports active experience approach to this trend. 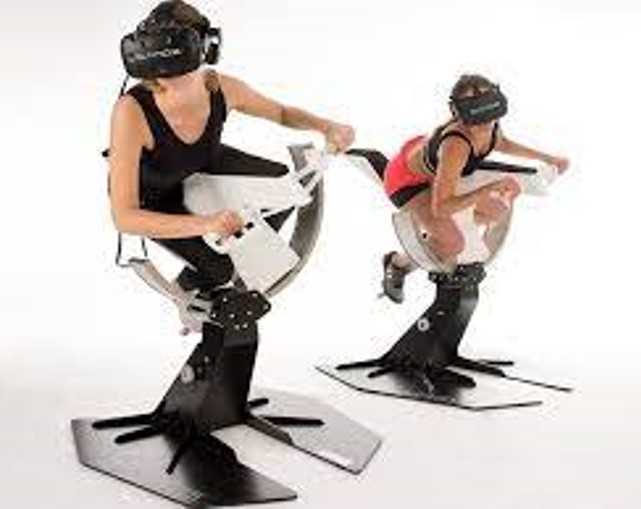 This concludes the first part of our two-part coverage of the Active Immersive entertainment scene. Our next part will appear in the next Stinger Reports, which will be released shortly. 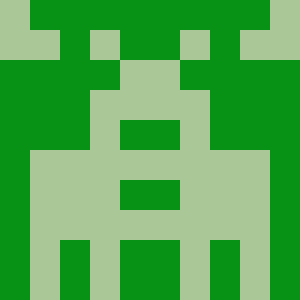 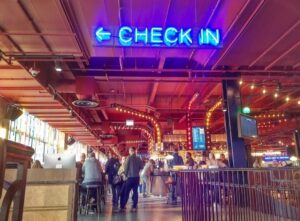 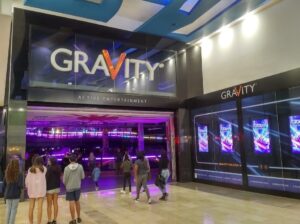 Entertainment Immersed in the Game! #1086