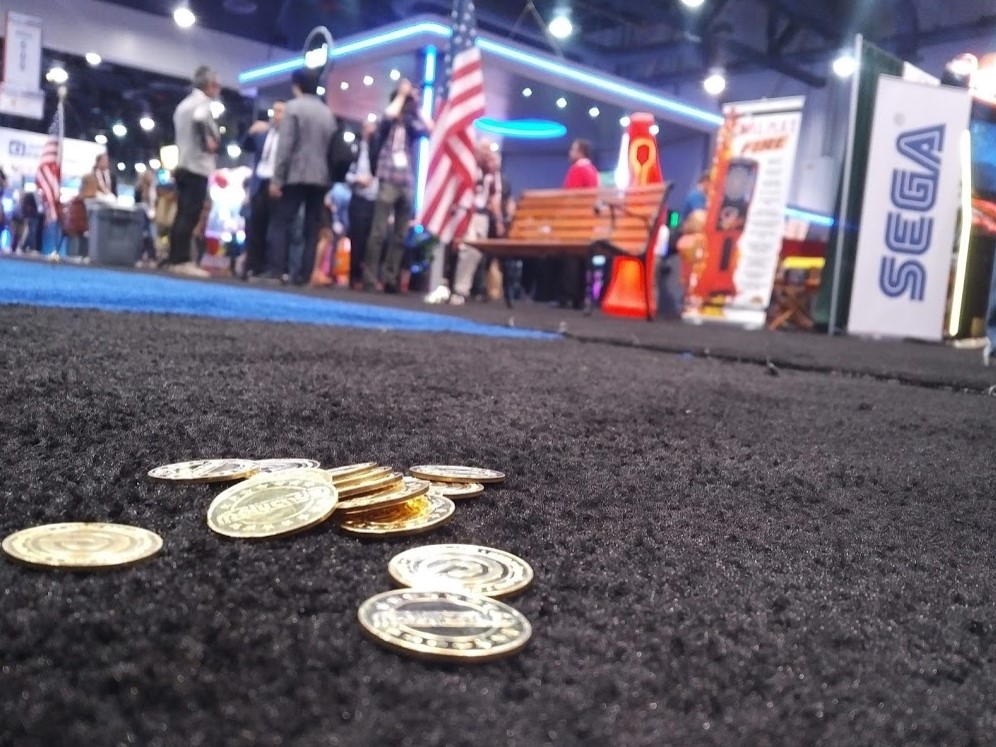 Just a matter of weeks previously, we covered the closure of PAC-MAN Entertainment (NAMCO USA) and the selling of its operation (to a group of still undisclosed buyers) – and we are now able to reveal the latest shoe to drop regarding Japanese amusement’s position on the once prosperous Western business, and the changing of the structure.

It cannot be ignored that the Global Health Crisis has exacerbated the serious fault lines within the Japanese amusement trade. Over the last few months, stories of restructuring, sell offs, and closures have dominated the sector’s coverage. While the actual amusement trade media in the West has been hamstrung to be able to report these developments in detail, the grapevine still connected to the Japanese amusement trade has been vibrating with news of the real situation in the home territories, and the continuing ramifications.

– The Build-up
After reporting a few months back about the developments that had rocked SEGA, including the replacement of the CEO, the renaming of the SEGA Corporation retaining the Amusement Machine (AM) development, and the selling of SEGA Entertainmentretaining the amusement facility business to GENDA. At this time, it was claimed that SEGA still had an active interest in the amusement sector, and would be continuing to release a roster of planned new titles. The 10th Anniversary release of ‘Initial D: The Arcade’ was used to illustrate this point, though information on other new titles seemed sparce. Many of those Japanese executives who attended the private “JAEPO Online Business Meetings” questioned the lack of any real AM business announcements.

The writing, however, seemed to be on the wall regarding the future of the SEGA AM operation. It was revealed that ANDAMIRO would be releasing the upright version of the shooter ‘House of the Dead: Scarlet Dawn’, with no plans for a Japanese, or Western release. Internally, all future AM projects in Japan were suspended, and several prominent AM executives started to undertake interviews to muse on their legacy. At first, this was positioned as part of the 60th Anniversary of the corporation, even seeing a “SEGA Arcade history” page on the official website. But it soon became clear that a message was being managed regarding the positioning of AM interests (past and present).

The handover of the SEGA amusement operation in Japan [KWP]

Outside of Japan, the Western amusement representation of the corporation through SEGA Amusement International (SAI) was seen to be a safe stewardship of the SEGAbrand, being the AM developer for the Western market in concert with its JP counterparts. A recent update of the webpage for the group was noted after an interruption in service, but continued to promote the SEGA branded IP. At the same time, moves were made to clear stock and the company, while impacted like all amusement business during the lockdown, still seemed to be focusing on new releases previously scheduled (see coming new machine release schedule coverage in The Stinger Report). There were no outward major changes, other than announcing the departure of the long serving commercial director.

– The Impact
It was in October 2020 when well-placed sources in Japan revealed major developments about to hit. The restructuring of the operation under SEGA Sammy Holding was exposed to be much more extensive than anyone had previously revealed, and the AM operation of the corporation was now to be consolidated. Those elements of value would be incorporated into the consumer game development operation, while the remaining amusement interests would be transferred. This would leave SEGA only offering IP and branding support of the created GENDA SEGA Entertainment and CA SEGA JOYPOLISinterests.

At the same time, it was confirmed that SEGA Sammy Holding was increasing its investment in casino business interests. It had already been revealed that the casino and gaming operation would now be restructured under the return of the Sammy brand. Sources also spoke of internal moves by the corporation, to be well placed to be one of the first to develop a casino property in the Home Islands. Part of the new Japanese legislation is allowing this business to be developed. This move would see all the R&D effort of SEGA focused on this direction, with the only other interests being IP and consumer game, and mobile investments.

Regarding SEGA Amusements International (SAI), it was revealed from sources in Japan in December 2020 but would take till March this year to confirm, that SEGA Sammy Holding would now be consolidating all its shares in SAI, which would be acquired by the new operation KAIZEN Entertainment (a UK corporation founded in December). This Management Buyout (MBO) would now take over control of the SAIinterests and would be licensing the SEGA brand and products towards operation of its Western amusement business.

Up until this time, SAI primarily represented a distribution arm for third party sales and internally developed products, created in partnership with the Chinese SEGA R&D resources, though still working with AM Japan for specific IP resources. It was revealed that 80-percent of their business came from wholly owned Western development, against any Japanese amusement releases. The move to being a totally independent entity, whilst still affiliated to SEGA Japan, will see SAI taking on a “first-right-of-refusal” of future SEGAJP AM releases, as and if they appear. SAI will still work on original developments in cooperation (as seen with the ‘Mission Impossible: Arcade’ release). This will also see previous SEGA JP executives stationed at SAI returning to Japan.

This new move will see an independent running of the SAI operation, covering the Western market for AM development – utilizing the SEGA brand name and IP. It must be remembered that SEGA has continued amusement operations in the United States through SAI. Back in 2011, the collapse of the SEGA Amusement USA interest saw the creation of the Play-It Amusement operation which was then directed by a renamed SEGA Amusement Europe (now SAI). All of this will now be consolidated under the SAIumbrella, and the team in the UK was keen to confirm they are moving forward on a pipeline of new developments, seeing this move as ensuring a bright future.

The familiar presence of SAI in the international convention scene [KWP]

For SEGA Corporation in Japan, the reason for the transfer to consolidating its interests in AM, was blamed squarely on the impacts on business from the COVID pandemic. SEGA is now focused on organizational structure and the need to reduce fixed costs. The AM business has been severely impacted by the international lockdown of operations, and transferring control of the company’s Western AM business was deemed to be the best route. In Japan, the corporation will also be reducing its AM exposure. While it is expedient to blame the Global Health Crisis, many observers feel that the SEGAmanagement has been struggling to find its way since the internal battles following the acquisition by Sammy, and more changes are expected to come.

– The Fallout
This marks a major restructuring of the Japanese amusement factories presence in the West, along with the impacts on AM business at home. Although, from a Western perspective, this is not a new situation; rather it is an inevitable and predicted decline in a once dominant Japanese position.

Not since KONAMI Amusement of America closed its doors and left the Western amusement business in 2003, has a Japanese factory walked away from direct presence in the Western amusement scene. This will leave BANDAI NAMCO Amusement as the only Japanese amusement subsidiary, a subsidiary that just saw its US entertainment facility division shuttered and sold off. This move means the company now joins names such as TAITO, Capcom, Universal, Nintendo of America, Centaur, SNK, American Sammy, Data East, Seibu/Fabtek, Irem, Kaneko, Mitchell, Hudson, JALECO, CAVE, Seta, Toaplan/Romstar, Banpresto, Tatsumi, ATLUS, Tecmo, as well as KONAMI and now the changes at SEGA, in the footnotes in the Western amusement industry’s history.

During the 60th Anniversary of the formation of SEGA, this marks an ignominious point in the corporation’s history, and may explain why certain Japanese executives have been so keen to attempt to manage the message of how such a successful and dominant force in the video games industry has been brought to this point. And how accusations of mismanaging the business since the glory days of the 1990s could be levelled at a litany of missed opportunities and poor business decisions ruled by arrogance. Gatekeepers once again under scrutiny, if not accountability.

For the Western amusement trade, the removal of SEGA as a Japanese subsidiary, and now as a newly consolidated and independent operation, will change little on the surface of day-to-day business. In North America, SEGA (acting through Play-It Amusement) has been low key compared to former glory, but in Europe and the UK SAI had represented one of the leading distributors, with partnerships in the UAE through ASI and across other territories. SAI will now be a new force on the chess board (some even calling this move “the creation of a UK Raw Thrills”!). These developments will inevitably create a tectonic fracture across the industry and we will see a major “resetting” of the business power struggle. As reflected in the PAC-MAN Entertainment sell off, and the impact on the distribution, against direct sales, pipeline brought on by lockdown.

SAI representing a wide selection of amusement and redemption [KWP]

In the home territory, the Japanese amusement scene will be once again thrown into upheaval. The consolidation of SEGA’s AM business, while not totally removing sales and distribution, does bring up questions about the impact on the facility business beyond the sites now sold to GENDA. As previously covered in The Stinger Report, the SEGA ‘ALL.Net’ (Amusement Linkage Live Network) distribution and payment platforms’ operation has yet to be defined following recent restructuring and sale of facility business. So, the loss of most AM operation could mean its collapse, and the momentous implications for the rest of the operator scene remain dependant on its infrastructure.

The news of the fracturing of SEGA’s amusement business, will mark the first of the big industry impacts attributable to the COVID-19 saga. But the ramifications and reverberations of this loss have only just started to be felt and it could be a “domino” moment for the traditional amusement industry. The change in the status quo could see operators, distributors, spare-parts, and even exhibition and media companies (dependant on SEGA’s status), being forced to quickly adapt or perish. We await the next development.

Having been one of the first to predict the upheavals that have impacted these Japanese amusement satellites, it is important we thank our sources, internationally, who have kept us abreast of these developments. That said, it has also been suggested that we will be about to see another major development in this ongoing saga. The domino of the SAI announcement is expected to cause another major development, linked to this “resetting”. We plan to bring news of this development to you very soon.